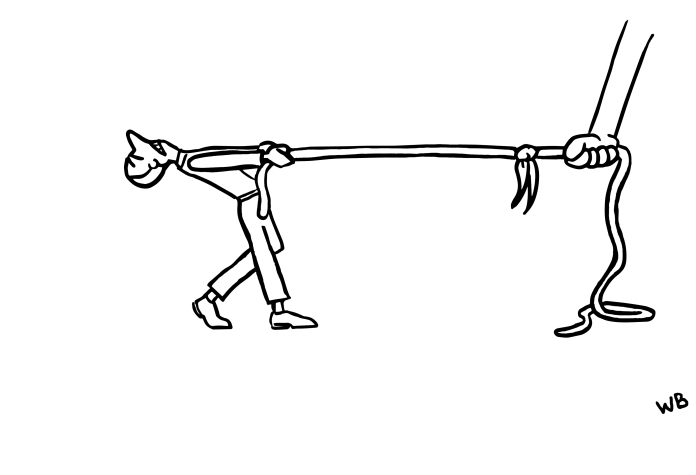 There is an art to getting things done. The problem with logic is that it’s only half of the equation (and “half” is being generous). Logic can lead to a false sense of understanding. “This is the logical explanation,” we may say. There’s a logical choice, a logical path, a “right way.” But logical thinking often neglects to consider the other half of the equation—the emotional half. And emotions are a much more powerful force.

A considerable amount of what occurs in the world occurs because of emotion alone (without even the slightest consideration for reason). Forgetting about the emotional side can handicap us in the real world of “getting things done.” An idea may be the most logical, but that does not mean it will always triumph. The real world is not a meritocracy; just ask an economist.

In recent years, economists have recommended that NFL teams spend less resources trying to draft superstar athletes. Instead, they recommend trading top draft picks for multiple lower picks (spreading their risk of picking a top round dud). Despite showing that such changes would translate into more wins per season (about 1.5 more), team owners and general managers have generally ignored the advice. Why? Because there is more to life than logic. Teams are illogically overconfident that their picks are better than the competitions’ and owners enjoy having big name players on the roster. It’s not logical; it’s emotional. Historical precedent, personal ideologies, social allegiances—these are what constitute the illogical side of life, the emotional side. Economists work in the world of logical suggestions, but the real power lies in the hands of others.

My favorite definition of “power” is “the ability to get things done.” It avoids the negative connotations we have. There is no mention to coercion or corruption, no distinction between strong and weak, no manipulation tactics or financial sanctions. Power can just as easily relate to a healthy marriage as it can to a government regime. We are required to “get things done” everyday, and our ability to do so benefits not only us, but our friends, family, and colleagues. Power, therefore, is something we should wish on everyone.

To “empower” a person is to bestow them with the ability to help himself. We live in a world where emotions reign supreme. Events often happen on emotion alone (without logical consideration), but rarely the other way around. Logic, then, is the empowering piece of the puzzle; it is the prerequisite for significant improvement. But unlike the power of emotional whims, we cannot achieve with logic alone.

Good leadership, parenting, governance—they all require emotional intelligence, as well as critical thinking. This is the cornerstone underlying television shows like Hugh Laurie’s House M.D. and Benedict Cumberbatch’s Sherlock—the lone genius struggling in a world of social interaction and emotions, knowing these inevitabilities are as much a solution as they are a problem, a strength and a weakness. Destruction is easy with emotions alone, but building something meaningful requires both heart and mind.

Last week we discussed the frustrations of the workplace—the unspoken, sometimes unknowable rules (the emotional side). But more frustrating than office politics is actual politics. It can be ugly at times, but politics is the ultimate “art” of getting things done, where the complexities of social interactions far outweigh logical idealism or truth. People who vote with their heads struggle with this concept. They cannot understand voting with the heart. And that’s the classic downfall of a logic-heavy worldview: It leads to the dismissal of the human condition and the social/emotional sides to us all.

There’s an old journalism maxim, “if it bleeds, it leads,” which sums up the emotion-heavy side of society. Emotional hyperbole is popular; it sells news. We like stories about people (human interest pieces), and if there happens to be a murder involved, all the better! Humans are drawn to other humans, often in ways that defy reason. A string of bad relationship choices, the flock of rioting fans after a win—none of it makes logical sense, but it happens nonetheless. We must attempt to see the forest for the trees.

Understanding how society works, with all its human behavioral quirks, can buffer the logic problem. There is a scene in the 2000 historical epic, Gladiator, where Oliver Reed’s character—a wise, embattled ex-gladiator—gives some advice to the young warrior, Russell Crowe. He says to Crowe, “I was not the best because I killed quickly. I was the best because the crowd loved me.” Oliver Reed’s gladiator understood how the system actually worked, and that understanding (not his skill in the colosseum) is what set him apart. Logic is necessary to our success, but it must be balanced with the understanding, compassion, and social skills that human emotions provide. Such a balancing act is a real art form.

This is the second installment of a series titled “Too Smart  for Your Own Good.”

2 thoughts on “The Problem with Logic”