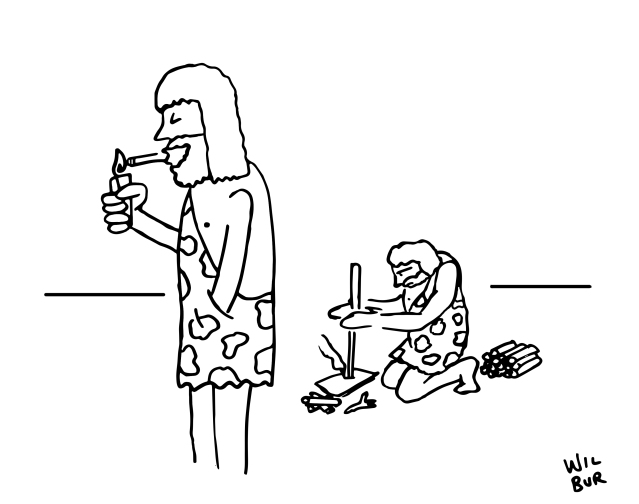 Indeed, if the same mistake is repeated over and over again, what is the point of being persistent?

If nothing else, humans are two things: (1.) We are tool builders, constantly adapting to new environments by creating new dwellings, clothing, modes of transportation, and societies. And (2.) we are runners (yes, runners). It is our defining ability to run that is perhaps the most fundamental aspect of success. Rather than learning from contemporary masters or fighting through trial and error, perhaps the lessons of success can be best learned from the rise of the most successful species on earth—ourselves.

Excluding the use of man-made vehicles, Homo sapiens are still the fastest animals on earth (over long distances… on land… if it’s hot enough outside). Yes, we are natural born runners, and this extremely specialized skill is the reason we stand on two legs, are relatively hairless, perspire rather than pant, and why our butts look so darn good. But before our brains grew large and humans reigned supreme, our early hominid ancestors used their unique physiology to their advantage over their knuckle walking cousins.

Persistence hunting—chasing prey until sheer exhaustion—is thought to be the primary reason for our running abilities. Our prehistoric relatives (and even some indigenous peoples of modern day) weren’t faster or stronger than other creatures, but they would chase much quicker animals, such as wildebeest, zebra, and deer, for one or two days until the animals simply collapsed from exhaustion. It is even proposed that the rich protein diet afforded by persistence hunting is what allowed for developing larger brains in humans. Therefore, the first lesson in our story is that persistence is the key to success—a lesson as true in the digital age as it was back then.

Microsoft, arguably the most successful company of the 1990s, was such a juggernaut that at the turn of century federal judges felt obligated to break up the monopoly. What made Microsoft so successful? In a word, persistence. Steve Jobs, in a rare 1995 interview, emphasized Microsoft’s persistence, saying:

Microsoft took a big gamble to write for the Mac. And they came out with applications that were terrible. But they kept at it, and they made them better, and eventually they dominated the Macintosh application market, […] they’re like the Japanese; they just keep on coming.

Even Microsoft co-founder, Bill Gates, acknowledges persistence as the key to his personal and professional success. According to Gates, the best compliment he ever received was when a peer said to a group, “Bill is wrong, but Bill works harder than the rest of us. So even though it’s the wrong solution, he’s likely to succeed.” Just by keeping at it, Gates achieved an elite level of entrepreneurial accomplishment. But while persistence may be the key to success, it is not a panacea to cure all ills. Persistence can be misguided.

Being the best long-distance runners didn’t stop us from inventing the bicycle or the locomotive or the space shuttle. Humans separated themselves from other hominids through our ability to adapt—to build the tools we needed to thrive. At a certain point, our ancestors spread across the globe, adapting to changing environments. Early humans built clothes and dwellings to survive the polar ice; they developed agriculture to create stability where there was scarcity; and they developed civilizations and law and order to manage increasing tribal size. Therefore, the second lesson of our story is that we must adapt to an every-changing environment, in order to succeed.

The two lessons of human success may seem contradictory—persist but always be changing; however, it’s a matter of balance. Peristence and adaptability are equally important, but persistence is broad; it’s goal-oriented. Adaptability is detailed; it relates to our behavior, the details of how we attain our goals. Finding a balance between the two is extremely difficult to achieve in practice. We often get caught in either the wrong goals or misunderstand right ones.

Warren Buffett once wrote to his shareholders, “When an industry’s underlying economics are crumbling, talented management may slow the rate of decline. Eventually, though, eroding fundamentals will overwhelm managerial brilliance.” He was talking about the newspaper industry back in 2006, and his comments serve as important distinction between productive persistence and blind stubbornness—a distinction that goes beyond newspapers.

Kodak was in the photography business, yet, they lost site of their true goal, confusing it for a film business, and failure followed. The modern world of healthcare is criticized to have the same problem—promoting health care where they should promote health. It is easy to write that we should persist in our goals, but much harder to clearly define them; however, we are all decedents of the most successful creatures in the history of earth. Therefore, perhaps we are all bred to be successful (one persistent, yet adaptable, step at a time).